“STANDING ON THE CORNER-IN THE FOOTSTEPS OF BOBBY TROUP” 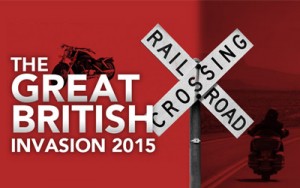 Board the butane buzzard and arc your way over Greenland and Alcatraz. Touch down in San Francisco and bus your way over the Golden Gate to the Cavallo Point Hotel in Sausilito. Dine on the water’s edge in the company of pelicans and cormorants at Scoma’s restaurant, acclaimed to be the finest eatery in San Francisco.

Start your engines and crank up your motors-it’s time to visit Ansel’s back yard. Ride to Yosemite National Park, one of the most spectacular parks in America. First discovered by the entrepreneur James Mason Hitchins and the artist Thomas Ayres in 1855, these 750000 acres were originally home to the Ahwahneechee tribe-and this is where one of America’s greatest photographers Ansel Adams pioneered his groundbreaking photographic shills.

Morning at leisure in Yosemite, and time to get the red corpuscles chasing the white corpuscles round the bloodstream. Mount up, start up and get ready for a real treat: the Sons have ridden several of the greatest rides in the USA. We rode the Going to the Sun in Glacier National Park and the Beartooth Highway in Montana-it’s time for another. Let’s pray it’s open ! Head west out of Yosemite, and make a right to ride the spectacular Tioga Pass at heights of up to 10000 feet before leaving Yosemite and heading southeast to one of America’s finest ski and recreational areas-Mammoth Lakes. Overnight the Westin Monachee.

So where do we go from there, and how do we top that ? We’ve got time on our hands, so how do we kill it ? In the words of Sammy the Cynic, “things are more the way they used to be, than they have ever been before-life is more of the same, and nothing changes”. Wrong ! Roll out, head southeast, pay your toll fee…and enter Death Valley. Death Valley got it’s name for obvious reasons, and we will ride all the way through it to the Furness Creek resort. Here we will commemorate and drink a toast to the recent activities of one Geezer Butler. Geezer, now 65 years of age and a member of Black Sabbath, was recently arrested at Furness Creek’s  Corkscrew Saloon for fighting and smashing a window. Step up you pugilists, and let’s enjoy their legendary Prickly Pear margaritas !

Death Valley… to Las Vegas-the Fantasy Capital of the World. Hotel and entertainment…to be advised !

Head east..to the Grand Canyon, where we will stay canyon side on the South Rim. Dinner and chirpups, overlooking what is arguably the greatest national park in the world. If there is any place on Earth that puts into place the grandiosity of Mother Nature, it is the Grand Canyon.This natural wonder, located in northern Arizona, takes us into our third state and is the most wonderful window into geological and Native American past. It estimated to be five to six million years old. 277 miles long and one mile deep ! Expect a view….or two !

Head south and let’s go visit the Painted Desert, located in the Petrified Forest National Park (dontcha just love that title-Ed) before we skirt Flagstaff. We’ve done the Blues Highway, but now it is time to get your kicks….on Route 66 !

Time to Take it Easy, and to quote the lyric:

“Well, I’m standing on a corner

and such a fine sight to see

It’s a girl, my lord, in a flatbed

Ford slowing’ down to take a look at me………

Well I’m running down the road trying to loosen

My load, got a world of trouble on my mind”

Overnight the Posada Hotel, Winslow..and dinner in the Turquoise Room. Which, for your information, has been voted the 3rd best restaurant in the whole of the United Sates. Where does the owner and chef John Sharpe come from ? Hartlepool !

We head east on Route 66, and we cross into New Mexico. For those of you who are fans of the hugely successful TV series, you will know that the expression Breaking Bad translates into “Raising Hell”. Our first stop in New Mexico will be Gallup-located on the Trails of the Ancient Byway and one of the designated New Mexico Scenic Byways. Gallup is known as the “Heart of Indian Country” and is located in the middle of a Navajo reservation. When the Spanish Conquistadors led by Francisco Vasquez de Coronado arrived in this region in 1540, they found a thriving and highly civilised Native American culture already in place. Today this town is home to 110 trading posts, making it the undisputed Southwestern centre for original Native American art. Overnight at the very western El Rancho hotel, one of the great Route 66 Hotels and “Home to the Stars”. The 49er Lounge is listed as one of the Top 50 Bars in the United States, and this hotel was a favourite haunt of Betty Gable, Burt Lancaster, Doris Day, Errol Flynn,James Cagney, Jean Harlow, Kirk Douglas, WC Fields and Lee Marvin. To name a few !

Ride east and skirt the home of the TV series,  Albuquerque , and head north to pick up the exquisite scenic byway the Turquoise Trail. This  stunning ride connects Albuquerque with our final destination-Santa Fe.This city is Ray Mears’ all-time  favourite. With its unspoiled beauty and 7000ft Rocky Mountain vistas, Santa Fe has been designated a Unesco Creative City for design, crafts and folk arts. It also boasts a thriving music scene. Settle in for

A SONS OF ROYALTY PRODUCTION 2015-THE CROW FLIES STRAIGHT

The itinerary is subject to recce and distances / overnight stays may change following the route check.   During the event the route may change depending on local weather conditions.